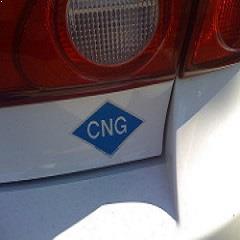 The greenhouse gas emission of these vehicles is reduced. Because CNG is easily dispersible in the air, the risk of accidents caused by spills is diminished.

CNG is created by compressing natural gas and storing it in high containers.

Since natural gas is usually cheaper than gasoline, many people have decided to change their cars with CNG vehicles.

The number of people who own compressed natural gas cars has increased lately, due to the high prices of gasoline and the need to use environmentally friendly alternatives. CNG cars are used in Europe, East Asia, North America and Latin America. The investment in a new fuel system pays for itself faster in the case of buses and trains. As a result, the first vehicles to adopt this new type of fuel were public transportation ones.

Natural gas cars have become widely used in some countries of the world. The highest numbers of CNG cars are owned by Iran people, followed by Pakistan, Argentina and India. Worldwide, many leading car manufacturers have launched bi-fuel cars (cars that can be powered both by gasoline and by CNG).

People who would like to change their cars with CNG ones do not have to buy a new bi-fuel car. In fact, every type of vehicle can be converted to a CNG vehicle.

For this purpose, what car owners need is a compressed natural gas conversion kit.

This kit includes various tools and tanks that must be installed in the automobiles in order to convert them into compressed natural gas vehicles.

What Are The Advantages Of CNG Vehicles?

The first and most important advantage of owning a CNG car is the low fuel cost compared to other types of fossil fuels, like gasoline.

CNG is also more ecologic, because it doesn’t emit greenhouse gasses and pollutes significantly less than other fossil fuel cars.

In addition, CNG cars  have lower maintenance costs, which adds to their cost-efficiency.

CNG is also safe, because the container is sealed, preventing spills, and because the fuel doesn’t auto-ignite as easily as others.

One of the drawbacks of CNG cars is the fact that the fuel needs more space to be stored. However, manufacturers have come up with new ideas to use the available space in a car more efficiently.

Instead of installing the tanks in the trunk, some manufacturers install them under the car or on the vehicle’s roof.

Considering the low cost of the fuel, and its environmentally friendly nature, investing in a CNG vehicle is a good idea for many people who are concerned with the rising price of gasoline and the problem of pollution.

Americans who would like to buy compressed natural gas vehicles can enjoy federal tax credits, which makes the purchase more affordable and appealing.