Tidal energy (tidal power) is a typical hydroelectric energy that takes advantage of the tides to generate electricity. The gravitational forces between the moon and sun with the rotation of the earth yield massive tides in our oceans and we can harness that energy to produce electricity. This article will unfold the technologies used in harvesting tidal power. 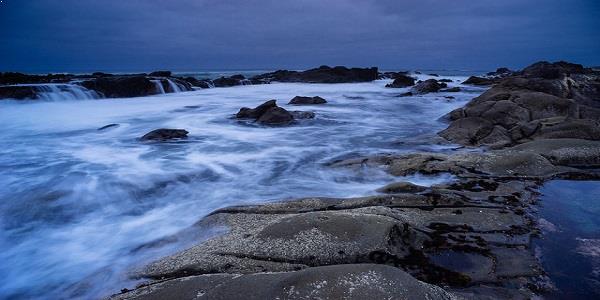 Tidal power has been used for hundreds of years ago in other applications but electricity production. The concept of producing electricity from tides is relatively new and remains untapped in many countries. The energy is renewable and sustainable. Compared to other forms of renewable energies, tidal energy carries more potential because it is predictable.

The first tidal power plant was erected in 1966 in France with a capacity of 240 MW and 24 turbines. Its annual production amounts to 600 GWh. This is a tidal barrage plant which I will explore later. I will also explore the tidal energy basics that how does this energy work and how is it generated. The advantages and disadvantages of tidal power are also unfolded together with the applications thereof.

How does tidal energy work?

This energy has an efficiency of 80% in converting tides’ potential energy into electricity and it outshines other renewable sources such as geothermal, solar and wind. It basically works by taking advantage of the rising and falling of sea levels. The process is the same as in hydropower production, but now the natural movement is harnessed instead of creating artificial lakes behind dams.

Instead of a single direction of turning the turbines, in tidal energy production, there are two directions. As thus, a reversible turbine is needed, and it is too costly. The movement of tides contains strong kinetic energy and that produces a higher output than hydropower. Electricity production is just one of the applications of tidal energy. There are other uses, and many more applications are pending because this energy is still in development stage with modern technologies despite ancient populations knowing about it.

How much does tidal energy cost?

Perhaps one of the stumbling blocks of unfolding the potential of tidal energy has been its startup cost. Tides have a higher density and, as such, one needs studier power plants to construct beneath the sea. Even with barrage, a cost of building a separate tidal basin is too high. Furthermore, the turbines should be different to other renewable energies with only single direction of turning them. Reversible turbines are costly.

The good news though, is that governments are subsidizing projects that utilize tidal power to generate electricity. For instance, the United States Department of Energy [1] has in 2016 announced an investment of $16 million for 17 tidal energy projects. These projects were required to increase the current annual power production.

The costs of tidal power installation make it impossible for individual households to harness the energy. The UK has proposed the Severn Estuary barrage system that will cost $15 billion with a capacity of 8000 MW. The Philippines country has also proposed San Bernadino Strait with a capacity of 2200 MW and it will cost $3 billion.

There are several types of tidal energy technologies. These include tidal barrage which is the most common one, tidal lagoons and tidal stream. Let’s explore these technologies hereunder:

This system involves constructing a barrage at the tidal basin or inlet. The barrage is in the form of a tidal reservoir with sluice gates and tunnels underneath to allow water to flow through. Turbines are installed which need enormous force of tides to turn them and activate the generator to produce electricity. See the picture below which illustrates the structure of tidal barrage system. 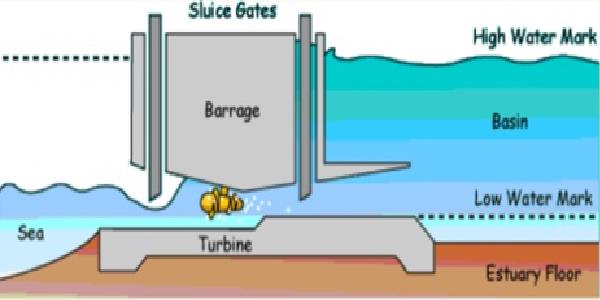 The efficacy of tidal barrage in producing electricity depends on the vertical height difference between the low and high tides. The distance should at least be 10 feet. This falling and rising of sea water turns the giant turbines underneath by flowing through them in either direction.

These are the smallest versions of barrages, and are available at affordable costs. The structures are also built alongside the ocean and they are filled by the rising of tides and emptied by the falling of tides. When this happens, water can be directed through the turbines which will turn and activate the generator to produce electricity. 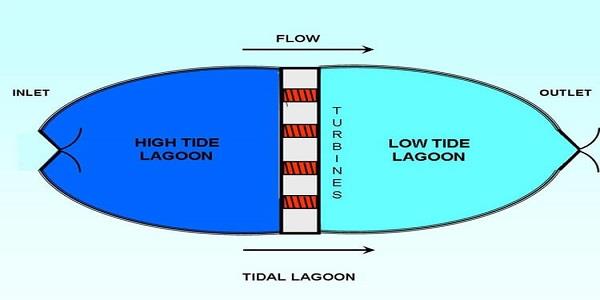 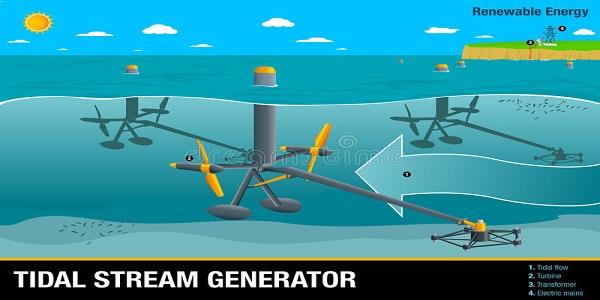 Tidal fences are also forms of tidal energy. They encompass vertical-axis turbines attached on the structure and water is forced through them which will then produce electricity.

How do you transport tidal energy?

One of the main challenges is to transport tidal energy from underneath the sea to the grid and eventually to households. However, NASA researchers [2] believe that it can actually be achieved with ease to produce ocean energy on a larger scale using long cables to the grid. There are other developing technologies that seek to turn tidal energy into hydrokinetic energy which basically use the same method of turbines beneath the sea.

There are many uses of tidal energy, and many uses are still being unfolded since the concept is still under development. The common tidal energy examples include electricity production, milling of grains, and energy storage like hydropower.

Electricity production through tidal energy is the main application that is harnessed and planned to be improved. France is the first country to leverage on this application by constructing the world’s first tidal plant in 1966 with a capacity of 240 MW and 24 turbines. Other countries such as Canada, India and China have followed suite to harness this power in producing electricity for the end-user. Tidal energy is predictable and powerful even though it is only active for about 10 hours a day.

For many years ago on history, this application has been common. Much the same way as windmills, the tidal power is used to process grains. The energy is more effective because of the relative energy density of tides over wind.

Advantages and disadvantages of Tidal energy

Well, unlike other conventional energy resources, tidal energy has no environmental effects. It is a clean energy with no contribution to greenhouse gas emissions and global warming. Many countries can forgo the fossil fuel energy and nuclear power to venture into tidal power electricity production.

Tidal energy is already being harnessed in numerous countries in the world. I am basically going to unfold the facts and figures in a selective number of top countries that already produce electricity out of tidal power plants.

How much tidal energy is used worldwide?

Yearly tidal energy consumption in the US

The United States is eyeing an improvement in utilization of tidal energy to produce electricity and probably reduce the burden of fossil fuels and the carbon footprint. The Department of Energy has reported that the United States can actually generate a capacity of 1400 terawatt hours in a year [3]. Up to 85000 households can be powered by a single terawatt, so 1400 terawatt hours can significantly reduce electricity bills of the country.  The country has incurred $16 million in investments of 17 projects aimed at harnessing tidal energy.

Renewable energies alone in the UK [4] have contributed to 29.4% in 2017 which was an improvement from the 25% contributed in 2016. The generation has amounted to 98.9 TWh in 2017. The country has added 4.8 GW capacity of renewable energies which then amounted to a capacity of 40.5 GW in 2017. Tidal energy has, because of this improved capacity, risen to 4 GWh in 2015. Today, it is reported that tidal power contributes 10 GW which is equivalent to 50% of the tidal power capacity produced in Europe.

Canada [5] is amongst the superpower countries that harness tidal energy to produce electricity. In 2010 alone, the country has produced 580 billion KWh of electricity, and its tidal energy generation is over 42 million KWh.

According to the Minister of State for Power and New Renewable Energy R K Singh, the country has a potential of 8000 MW of tidal energy [6]. The 7000 MW is in the Gulf of Khambhat and 1200 MW in the Gulf of Kutch.

Worldwide [5], the potential for tidal energy generation stands at 450 billion KW. Sihwa Lake Tidal Power Station in South Korea holds the metal of being the largest generator of tidal energy in the world. It is followed by tidal energy plants in France and Russia.

There is so much potential of tidal power generation in the whole world. Experts are predicting a capacity that could be over 120 GW [7]. This could bring a new dawn to renewable energies in an attempt to minimize carbon footprint with its adverse effects on global warming.

We have seen the advantages and the disadvantages of tidal power, and the applications. I have explored the technologies used to harness this energy and went further to highlight the yearly consumption of superpowers countries.

Tidal energy holds so much potential to generate electricity in many coastal cities. The concept of using it in electricity production is relatively new and as such there are still new developments to uncover how this can be optimized. Currently, tidal barrages are the most common technologies used to harvest electricity from tides. Tidal turbines are also considerable to install turbines beneath the sea to produce electricity.

The prohibitive factor to harnessing tidal energy is the exorbitant cost of infrastructure. Transporting the energy using long cables from underneath the sea is also costly. While the tidal turbines work like wind power, they are too expensive because of the reversibility feature to accommodate the rising and falling of tides. Many underdeveloped countries may struggle to invest in this infrastructure as long as fossil fuels are still present. The good thing about tidal power is that operation costs are actually minimal.